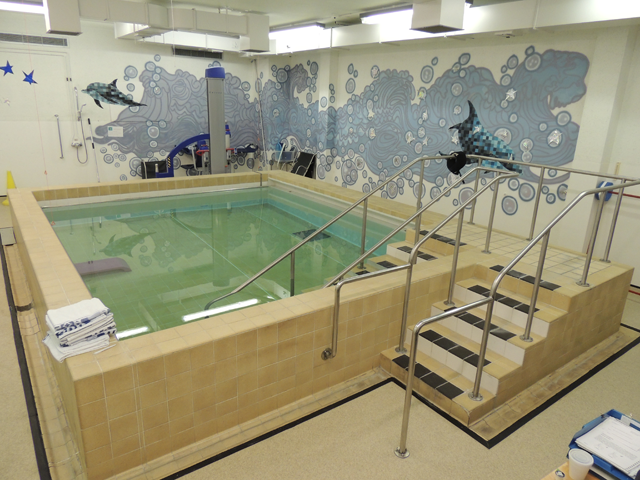 So I attended my first hydrotherapy session and I really enjoyed it. I was able to use the access stepped ramp to get in rather than be hoisted. I have been hoisted once when I tried to get some exercise at my local swimming pool which I found to be a horrendous experience. I felt vulnerable and hated being the circus freak show entertainment for the group of schoolchildren in for their swimming lesson! Still if it had been necessary I would have used it today, with only two other patients there at the time I am sure my dignity would have managed to stay intact!

The water was warm, like a cool bath. It came up to my armpit level. The first thing I had to get used to was the buoyancy of the water being so long since I was last in a pool I was not prepared for its effects. I felt like a cork bobbing about, terribly unsteady! I hoped that as I am “weeble” shaped that I might have their wonderous gravity defying properties because “weebles wobble but they don’t fall down!” (now who remembers playing with them! Anyway I was asked to make my way around to where there was a chair mounted on the pool wall.

The first exercise was to curl my leg under me as while sitting. Pulling my foot upwards to stretch the muscles in the back of my legs and curling my leg under me as far as I was able, feeling the stretch along the top of my thigh. Ten reps on each leg while letting the warmth get to work all over me. Next was simply standing, using my arms on the rails to hold some of the weight  while bearing as much weight on my bad leg as I could tolerate, swapping to the other leg for rest breaks and taking a little more weight each repetition. By now I could feel my muscles starting to grumble.

Then I had a float collar placed around my neck. I was held as I raised my legs to float on the surface and guided into the corner of the pool where I could rest my head against the wall and hold onto the rails on each side. I felt nervous, like I was going to sink like a stone at any moment but really I was in safe hands but still I gripped those rails for dear life! I was instructed to roll my hips to one side then back to the middle and then off to the other. This was gently stretching my spine and lower back muscles. I did feel pain with this, grimacing, I was told not to stretch so far. To allow my back to slowly relax and stretch. In ten minutes I was able to roll farther and with less pain.

The last exercise was to side step my way across the pool to the ramp. Apart from the off kilter “ Oh hell I am going under any second” feeling this was easy but I know this would be a difficult exercise out of water.  Without the benefit of the warmed muscles and the bouyancy relieving much of the pressure of my weight I could not have acheived these movements or sustained activity. Time was up, around fortyish minute had passed in what felt like fifteen! I was pleased with what I had managed. Gentle exercise it may have been but I haven’t sustained any activity for that long in years. I could definitely see a twelve week course of this helping a lot but here’s the kicker..

This was to be my one and only session! The hydrotherapist is going to be working on a separate project with the public swimming pools ran by the local council to raise awareness of the needs of people like myself. To try to bring in better access, times where we could have more privacy, times where they may raise the pool temperature, exercise classes aimed at rehabilitation rather than aerobic style weight loss sessions and the like. Unfortunately they haven’t been able to find another therapist to fill in for the next six months so there will be no more hydrotherapy for patients in the Scottish Borders. While it sounds like a worthy project it leaves an awful lot of people without access to this invaluable healing treatment. I was told to call in six months to find out if it was back on and ask to be seen again. The hydrotherapy pool has been under threat for the last few years. The local council planning to move the facility to a new location, one less accessible and not even built so it would take considerable time to bring into service. I really hope not but I feel the oncoming closure of this valuable facility. Stealth closure perhaps?

Although there is no new official news this report from July last year in the Peebleshire News outlines the councils plans. Although the pool is very well situated at the hospital for patients in the borders I would have no complaints if a new service was up and running in the new location quickly! Cutting the service off for at least six months is bad enough but the prospect of not having it for the foreseeable future is dire indeed. Having only had one session I am able to see just how beneficial and invaluable hydrotherapy is for those in need of injury rehabilitation and those like me with mobility problems and low body strength.

So just my bloody luck! Talk about bad timing! In a way I wish I had never had my first session as I felt so much hope I had found something to help me on my journey to better health. However on the other hand I have a set of exercise that I could easily perform myself or with the help of my husband if I can find a pool warm enough not to make my body scream in agony and cramp up so badly all over that I am practically incapable of movement! So far I have not been able to find any warm water pools but there do seem to be spa pools that might be large enough. I did find a private hydrotherapy pool but the cost was extortionate! They say you can’t put a price on your health but if the price to better health is above your means then that path is closed. Here’s hoping I can locate somewhere not too far away that I could continue this on my own.

As for how I feel afterwards, yes I am sore but it is bearable. I can feel all the muscles I have worked but they are not screaming at me.. yet! I always feel the worst of any activity two days after! I have no idea why it takes that amount of time but I believe an out of proportion and delayed reaction is very common. I  feel extremely tired. Most people feel tired after swimming anyway so this is added on top of my usual exhaustion. I slept for three hours straight earlier, something I haven’t managed for a good few months now! The elation of starting this treatment is gone, I felt very low earlier but better now as I have looked into trying to carry on on my own. The therapist said any activity in warm water would be beneficial so I am hopeful I can find a place to continue and not waste more time stagnating at home!

28 thoughts on “My First Hydrotherapy Session”

I'm a woman in my 40's and finally feeling that I know who I am and why I am, I would like to share the shadows from my life. Having got here fairly intact and along the way found the ability to take a step back and see things more clearly it is my hope that perhaps by blogging I may help others through their own dark places.

Daily news and entertainment for African-Americans. Your one stop for all things Black America.

Light and Shadows
The Upstairs Archives

A random repository of how-to-write and geekery, with an occasional snippet of accidental wisdom.

Writing, the Universe and whatever occurs to me

Where the imagination soars on glowing wings! May the words ever flow!

Living a radiant life comes from within. There's a spiritual component and a physical component. Enjoy the journey with me and let your light shine!

Drapetomanic
Dancing along the Ups and Downs.....

"Life may not be the party we hoped for.. but while we're here we might as well dance... Jeanne C. Stein

The Musings Of A Health Blogger For Curious Individuals

To Hold and Hug as You Remember

Living and Learning Through JESUS CHRIST